Applause for It's About Thyme Farm

In Minerva, it's all about the pumpkins 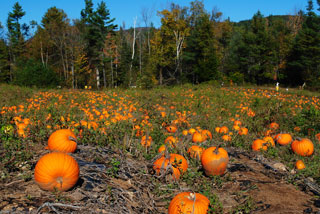 MINERVA - At least this time of year, its about these: They're orange, round, stemmed, heavy or light, big or small, ribbed, sometimes pale, and often numerous.

These are all descriptors of the fruit that grows in densely packed vine patches that are usually ripe in late September/October. Of course, its pumpkins we're talking about, and you will find lots of them growing in a back field at the end of Smith Road in Olmstedville at a place called Its About Thyme Farm.

Its actually been hard to miss the Pumpkins this Way signs in and around the Town of Minerva; they will lead you directly to the Farm, which has been operating for about four years now, and seems to expand in diversity and quantity each year. The business is owned and operated by Diane Colletti, who has lived in town about six years. Although pumpkins and hardy mums dominate the scenery at the Farm this time of year, the two greenhouses support annuals, perennials, fruit and vegetable plants (and of course herbs) from April on into the fall. Its About Thyme Farm has grown into a successful business over the few years its been in existence. Colletti has been very pleased with its success: Everyone comes and says how happy they are to have this in town.

Colletti has not always been in the farming business. For 16 years she and her husband Steve owned a restaurant in Middletown, New Jersey. They eventually settled in Minerva after searching for just the right area. They have four children Tina, Mark, Travis, and Steven. With eight acres out of the 12 they have cultivated occupied by pumpkins, Its About Thyme Farm is the biggest pumpkin patch in the eastern Adirondacks. A trip to the farm to pick-your-own pumpkins will let you see how extensive this patch really is. Another of the farms cash crop, hardy mums, are plentiful, potted, and serve to catch your eye quickly as you drive up Smith Road to check out pumpkins. Asked about what the hardy really means, Colletti said Hardy means that the mums can take a lot of frosts. She went on to say: .but the winters here are really tough. There's little argument there.

The Farm also offers up marked hiking trails that wind around the wooded parts of the property. Next year, look for a special scarecrow display along those trails. Colletti had a number of school groups visit the farm last October for pumpkin-picking, including Cheerful Crickets, North Warren Central School, Head Start, and Minerva Central School. With free hot chocolate and cider donuts available, the farm is a great place for kids of all ages to come and pick or just enjoy the pumpkins. Although she is hoping to install a heater in the second greenhouse (one of the two currently houses a heater), which would allow her to expand the variety of plants she grows, Colletti plans to stay small and local. I want to stay personable and hands-on. The idea is to stay small without major expansion.

Colletti has also had a hand in the planning and development of the North Creek Ski Bowl community flower garden, viagra piller she has her own small section that she maintains. She has had lots of encouragement and support from the community in her business endeavors: Everyone comes and says how happy they are to have this in town a great business. As a farmer, Colletti's livelihood is subject to the weather and its craziness. She asserts that weather is unpredictable, and states We've been lucky, holding on with what we've had so far.

Come to the farm and check out the mums, gourds, fresh produce, as well as the pumpkins. Don't forget the free hot chocolate and cider donuts. You too, can find the perfect pumpkin (or set of pumpkins) that will fill all your large orange fruit needs. Halloween is closing in on us, so don't forget!